HOW TO JOIN US ON OUR ULTIMA ONLINE SERVER :D

Jump to > guide for new players

(We chat on Discord while we're playing: https://discord.gg/n4mWa6N33R) 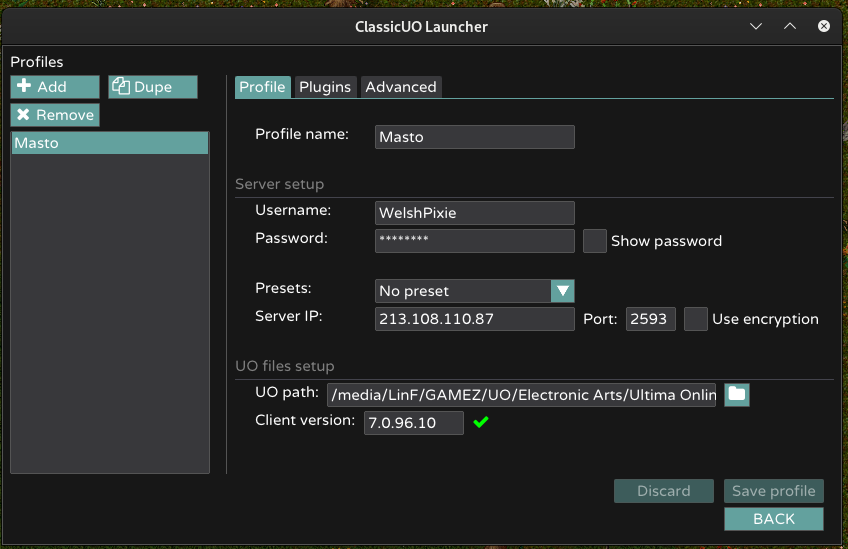 On connecting, the shard (server) name you should see is 'Tulip'. 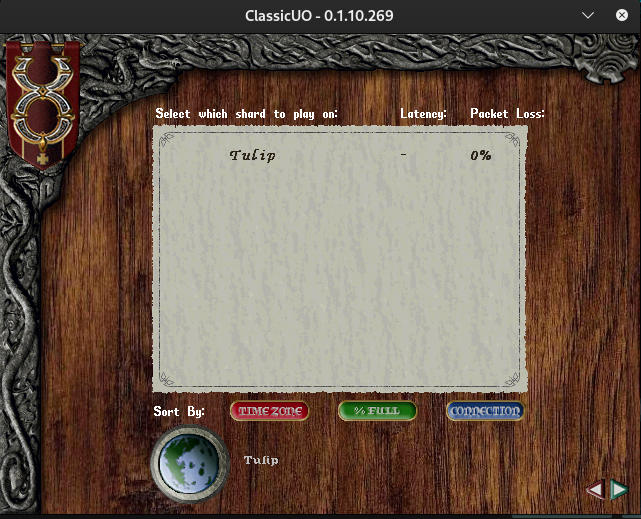 This is the server emulator we're running: https://www.uox3.org/docs/ (You don't need to know anything about this, unless you want to look through the docs to see what the features of it are)

Lastly, this version of UO didn't have global chat, so we've been using Discord to communicate when we're playing in-game :) You can join here: https://discord.gg/n4mWa6N33R

The town you'll spawn in is called Britain. It's a safe town where you're under the protection of the town guards, and there are loads of shop vendors, skill trainers, and general NPCs milling around. I recommend taking a little while to explore the town, poking your head into all the shops, and interacting with the vendors to see what they sell and what they can train you in.

There are three main ways of making money in the game;

1) Kill things, loot their bodies - most mobs drop gold and some other items, and if you're killing animals, you can double-click the knife in your pack that you start with, target their corpse, and you'll skin them for hide. (Hide is heavy - buy a scissors from the Tailor to cut it into lighter strips!)

2) Trade skills - gather resources, make things with them, sell them. Gathering activities will also increase your score stats (lumberjacking and mining increase your strength, for example, which also increases how much you can carry before becoming over-encumbered)

3) Begging! There's a 'Begging' skill in the game. Right now it's 'broken' in the sense that it gives you far more gold than it should, and begging is incredibly lucrative. If you don't mind standing in one spot spamming the begging skill at a nearby NPC, it's currently a good way to make a quick fortune. Even when it gets patched to be properly balanced, it'll still be somewhat lucrative.

The area immediately surrounding Britain is somewhat safe, but will still present a challenge until your combat skills have levelled up a bit.

To start with, it's probably best to practice fighting on the critters around town - the birds, rats, etc. When you're comfortable with that and are killing them easily, you can venture further afield.

If you head out of the north-west corner of Britain, there's a graveyard where undead spawn. Some of these are easier than others, so be careful - they can also gang up on you. The forest in this area also has higher level critters than in town - wolves, bears, hinds, etc. - and look out for giant spiders and dire wolves.

Heading out of town from the south-west corner will take you into Britain's farmlands. This is a more peaceful area than the northern forest, with lots of farm animals and more birds. It's a good intermediary between Britain and the forest.

If you bite off more than you can chew, run back towards town until you see the message that "You are now under the protection of the town guards", and type 'guards' into chat. This will summon a guard who will immediately one-shot whatever's chasing you - you won't get loot, though.

While you're adventuring, keep an eye out for NPCs marked Wandering Healers. When you die, you'll appear as a ghost next to your corpse, and you'll need to make your way to a healer who'll resurrect you - then you'll have to run back to your corpse to loot it. There are loads of these wandering healers out in the wild and it's always good to make a mental note of where you last passed one, just in case. If you can't find one, make your way to the nearest town, where there are always healers.